One Man's Kingdom
The Life of 'King' Carson of Nuguria 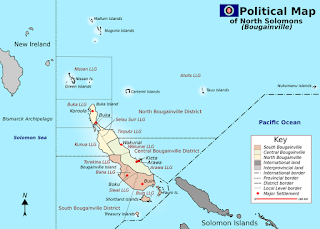 Nuguria is at the top of the map

He came back to his island home with his mother and sister at the end of World War Two. They were returning from wartime exile in Australia to Nuguria Atoll and the devastated wreck of a coconut plantation. His father, Lewis Carson, was one of the Australian prisoners-of-war lost at sea when the Japanese ship Montevideo Maru was torpedoed by an American submarine while transporting them from Rabaul to Hainan for use as forced labourers. 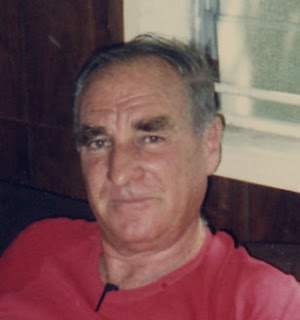 
Nuguria is one of the Polynesian outliers which ring Papua New Guinea. Its people are handsome, golden-skinned islanders; their original Polynesian heriditary characteristics have been modified by Micronesian and Melanesian genes contributed by arrivals from visiting canoes from Kapingamirangi Atoll to the north, from New Ireland to the west, and perhaps by visits from the ships of passing seafarers ranging from Admiral Zheng He's fleet on its voyage of exploration in 1421, to later ships carrying European explorers as they charted the legendary Pacific Ocean.

The short-lived 19th century German presence in the South Pacific made Nuguria plantation an attractive prize after Germany's defeat in the First World War. The victorious Australians seized it with alacrity, unceremoniously ejected the former owners with little or no compensation, and sold it, along with hundreds of other similar assets, to their own returned veterans. One of these was Lewis Carson, father of Graeme.

Nuguria was Graeme Carson's fiefdom. He ran the atoll as a benign but absolute ruler, and totally dominated its inhabitants, as did his similarly placed counterpart, John Clunies-Ross, on Cocos in the Indian Ocean. Force of character and an absolute belief in their right to rule was a characteristic of both men, and this was accepted by the islanders until influences from outside sewed the seeds of discontent. The Winds of Change have now made anything remotely resembling this state of affairs unthinkable and much ink has been spilt reviling the discriminatory attitude and the paternal mindset of those early times, but whether the absence of aid, assistance or basic governance for Nuguria which now prevails is in an improvement is a legitimate question.

Like many of his contemporaries, Graeme Carson accepted responsibility for the health and welfare of every individual on his property, in his case, all 58 islands on the twin atolls which made up Nuguria. He was administrator, doctor, nurse, mechanical engineer, book-keeper, unofficial arbitrator in disputes over land, unofficial matchmaker between partners from different families, and occasional pugilist when disputes demanded strong action. His small ship was used to transport patients to Rabaul for hospital treatment free of charge and he arranged and paid for places in the prestigious King's School in Sydney for several young Nugurians. In short; his word was law, and government regulations and decrees from distant Rabaul ran a bad second to on-the-spot decisions by the freehold owner of Nuguria. 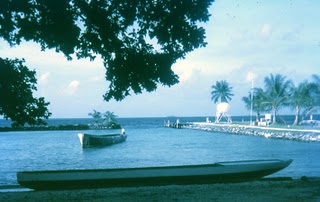 
Carson's family lived on Tekani Island about 3 miles from the airstrip in a house built by his father, and the Nugurians occupied the adjoining island of Busureia. As well as providing money in return for labour or locally harvested copra and trocas shell, Carson was the only source of medical treatment on the atoll and the only authority to turn to in disputes. The nearest government official was many days’ sail away.

Communication was by tenuous HF radio link to Rabaul on New Britain using the radio in the plantation office surrounded more often than not by a group of attentive bystanders. The artificial boat harbour lay immediately in front of his house, its retaining walls formed by stacked mushroom coral heads overlaid by clean white sand. This tiny harbor sheltered schools of small bait fish in addition to the dugout canoes used for transport in the lagoon. In the early 1960s, he used his own labour and materials to carve an airstrip out of the narrow island at the southeast end of the atoll: 2,500 feet long, with a thin grass cover over coral rubble, it allowed fast and easy access to outside medical aid together with much faster mail delivery. It also produced a stream of official visitors from government departments in Rabaul whose insistence on correctly completed paperwork was not always welcomed by the busy owner of the atoll! 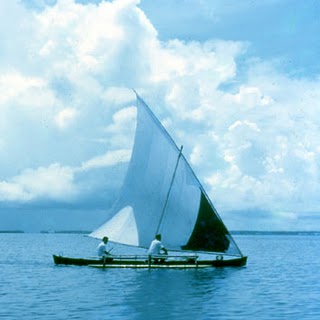 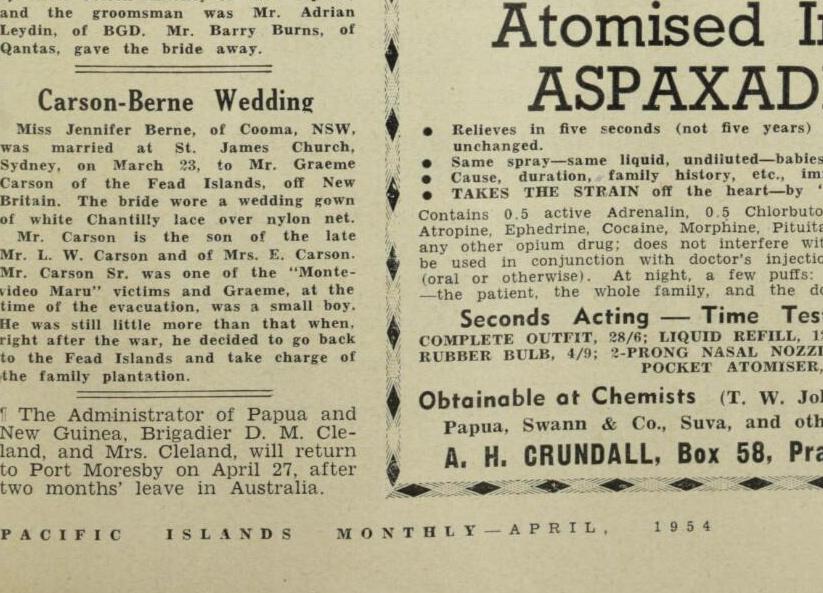 Graeme Carson married his first wife, an Australian girl, who gave him a son, Timothy. His mother, who lived on Nuguria as an undisputed matriarch, clashed repeatedly with her, and the marriage ended in divorce. Carson remarried, this time to Tetau, daughter of an heriditary Nugurian clan leader. She bore him another six children. The redoubtable Eileen Carson co-existed in wary but resigned amity with Tetau, until the matriarch's death by drowning after a fall from the seawall during a violent northwest gale.

Political Independence for Papua New Guinea in 1975 marked the start of a revolt by young islanders against what they now regarded as the exploitation of their homeland. The easy relationship between Carson and the islanders began to deteriorate into open hostility, often fuelled by outsiders who now began to arrive on Nuguria as the invitees of islanders returning from school in New Britain and Bougainville.

He was granted citizenship of the newly independent nation of Papua New Guinea, renouncing his Australian citizenship in the process. While it was never officially spelled out, Australian passport holders who tried to continue in business in Papua New Guinea soon discovered that it was difficult to do so in the face of official harrasment by newly promoted government officials determined to exert their newfound authority. One of the unforseen consequences of this change in nationality left his family divided into those born before he became a Papua New Guinean citizen and those born later. The former were able to get Australian passports and move freely between New Guinea and Australia: the latter, as citizens of PNG, were only able to visit Australia for brief periods on tourist visas.

After 1975, the plantation industry throughout New Guinea went into a rapid decline. Labour became hard to get, and even harder to control. No plantation was immune and production of copra and trocas shell rapidly fell nationwide. A rise in nationalist sentiment as the new and inadequately prepared nation tried to continue the sophisticated administrative practices of its former colonial masters adversly affected Nuguria plantation and many other agricultural and commercial enterprises.

Life on isolated Nuguria Atoll was slow to change and the coconut groves which covered most of the 58 islands in the group still produced copra, while the reef continued to yield commercial quantities of trocas shell. Carson still owned and controlled the atoll, but his sway no longer held to the extent that he could decide who could and could not live there. Outsiders including missionaries from some fundamentalist Christian sects arrived. They succeeded in proselytising some of the more impressionable islanders, persuading them to discard traditional ancestor worship and replace it with their own aggressive brand of Christianity. Schisms developed, sometimes dividing families. One breakaway group moved to the southern end of the atoll and built a village restricted to the newly converted.

A few short years after Independence, most of the expatriate population of New Guinea was either selling up and moving out, or adapting to the new regime. Carson, now a citizen of Papua New Guinea, stayed on and adapted as best he could, but labour was unreliable; production of copra and trocas shell continued a downward spiral and his bank started to deliver threats of foreclosure. 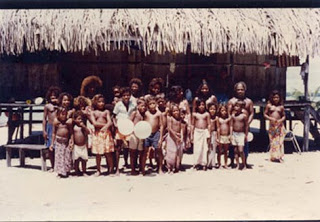 
Nuguria is no longer a working plantation. 'King' Carson is dead and the islanders are now left largely to their own devices with only sporadic official visits from the Papua New Guinea government. The airstrip, hacked out of the jungle by teams of villagers and plantation labourers is overgrown and no longer useable. A cargo ship which brought regular supplies and medical assistance to the atolls is broken down and unseaworthy and Nuguria can now only be reached by a hazardous dash across the miles of open water which separate it from New Ireland in small workboats or outboard-powered sampans which occasionally risk the crossing, or by PNG Defence Force patrol boats.

The atoll is notionally administered as part of the Bougainville Province, but Bougainville, wracked by internal divisions carried over from the civil war which led to the destruction of the huge open-pit mine at Panguna, cannot govern itself, let alone concern itself with distant Nuguria, which it has effectively abandoned.

In early 2002 Carson was voyaging from Nuguria to Nissan Island en route to Buka at the Northern end of Bougainville in the plantation workboat, when he collapsed with what was later diagnosed as a severe cranial occlusion. His crew continued on to Buka where the former hospital, now reduced to an aid post with limited medical equipment, still existed. After a long delay, he was evacuated by air as an emergency patient to the Catholic Mission Hospital at Vunapope on New Britain, where he was treated for the stroke which had left him partially blind and unable to speak distinctly. Months went by and his condition did not improve. He and his wife Tetau flew to Australia, the nearest source of skilled remedial therapy for a stroke victim, but the delay in obtaining specialist treatment had by then resulted in permanent damage.

Although still active, he spoke with difficulty, he could not write or type, and his vision was poor. As a Papua New Guinean citizen, he was granted a three-month visa by an unsympathetic Australian High Commission in Port Moresby, which endorsed the passport visa of this former Australian citizen and member of The Royal Australian Naval Reserve "Not to be renewed or extended." Medical treatment in Australia was cut short when his visa expired, and he returned to New Guinea and to Nuguria where he died in May 2004.

He is buried alongside his mother on Tekani Island near the deserted and abandoned house where he lived and worked for most of his adult life. The trade wind still stirs the palm fronds above the graves and frigate birds circle high overhead, as they did when he and his sister lived there as children on this lonely Pacific atoll on the edge of the world.