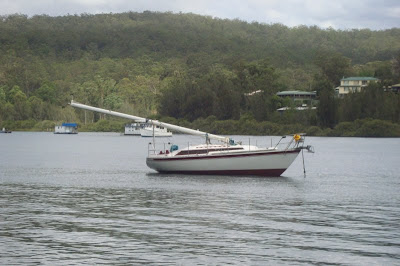 A certain vessel has returned from the obscurity of Cyne Mallows Creek, refurbished and restored to her former glory.

She's a Compass Easterly 30 who's spent all her life at Pittwater and Gosford before coming to Nelligen.

Looking out for Lucas! 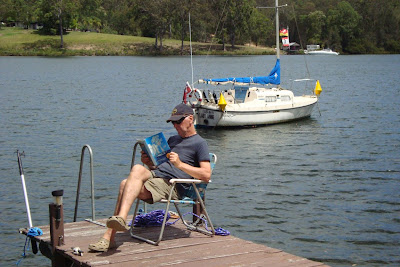 An (unfinancial) member of the Nelligen Yacht Club phoned to say that the Alan Lucas was sailing up the Clyde River.

Of course, anybody who has sailed the east coast of Australia or read any number of sailing magazines over the last four decades will know the name. Alan Lucas hit the sailing scene in 1968 with the release of his indispensable pilot book, Cruising the Coral Coast, now in its eighth edition. So to attract Alan's attention, I sat on the jetty and waited, nonchalantly displaying a copy of his Cruising the Coral Coast (albeit an old 4th edition which I picked up from the local op-shop - remember, I'm a self-funded retiree!).

Altogether twenty-three books and cruising guides have been published by Alan Lucas since the 1960s, covering not only Australian cruising grounds but the Pacific, Europe, Red Sea and Indian Ocean, along with a plethora of How-To Manuals. Alan is quick to add that most ‘never went to a second edition or were unceremoniously remaindered.’ Regardless, many of us have more than one well-thumbed Lucas book in our library and remain on the look-out for additions to the collection!

Born in July 1936, the young Alan Lucas began his lifelong passion for life afloat on the Lane Cove River, “…much of it trying to drown myself in a strange range of home-made craft, from tin canoes to rafts, war-surplus rubber dinghies and aeroplane wing fuel tanks…” In his early teens, VJs and open 12’ skiffs replaced the earlier prototypes before he became the proud owner of a “dilapidated 6-metre launch” which he ketch-rigged. Although a foundation member of the Sydney Junior Offshore Group, racing has never featured heavily on the Lucas sailing agenda. ”Big time racing doesn’t grab me being a non-competitive person,” he says. “However racing is the best way to acquire sail trimming skills. In that area, cruising makes you pretty slack!”

Alan's flair for graphic layout has origins in his trade as a commercial artist. Freelancing in advertising agencies kept him afloat financially in the early years, enabling him to dabble in a variety of far more alluring odd jobs like his stint on a 22m Tasmanian trading ketch running fishing charters out of Sydney and working in the Royal Sydney Yacht Squadron boatyard. This was “the best” - says Alan and no doubt the beginning of his love affair for ‘mucking around with boats’.

At 22, he began building the first, a 9.5m plywood ketch called ‘Rendezvous’, launching her two years later as his first live-aboard home. For 11 years, 'Rendezvous' carried Alan up and down the East Coast, to the Top End, Timor, the Solomons and New Guinea (where he was lucky enough to meet Robin Lee Graham of Dove fame. ”His cat and mine got along famously.”) During this busy period he also married, had a son and penned the first Coral Coast.

”The inspiration for the book came in 1963 when I proposed a series of anchorage articles for the now defunct ‘Powerboat and Yachting’ magazine. When told the pay, I decided to risk doing a book! I tried getting a Queensland publisher to no avail so I sailed down to Sydney where Horwitz Grahame finally accepted it in 1964. Why they then took four years to release it is beyond explanation – I just don’t know because by the time it was at last published, I was in the Torres Strait.”

The ‘Hippy Era’ was in full swing and Alan says the guide was well received more for its “folksy, life changing ways” than its anchorage descriptions. “Incredibly, I received quite a few letters thanking me for wrenching people out of their nine-to-fives to do something different. The most extraordinary incident was when I found a castaway on a Torres Strait Island who had accidentally been abandoned there by a charter boat. He reckoned his battered copy of 'Cruising the Coral Coast' was the only thing that kept him alive (in those days it had a lot of bush tucker and cooking-type stuff in it). He wasn’t fawning because he had no idea I was the author and I didn’t tell him!”

While ‘Cruising The Coral Coast’ lured legions of ‘squares’ seaward (and sustained the odd castaway!), 'Rendezvous' was meandering its way far from the limelight but indelibly into Alan's memory as one of his favourite boats. He affectionately remembers his first live-aboard home as “Rough as guts but a good sailer that never needed a hand on the tiller – she balanced on all reaches with nothing more than sail adjustment.”

If only life ashore could have been as easily trimmed! After moving onto Palm Island where he worked as skipper of the cargo boat, his marriage failed and 'Rendezvous' was sold. By 1972, life on the land had lost its novelty – forever. “I have to tell you, living ashore was the most vile period of my life”, Alan emphatically maintains. When asked to share his most frustrating cruising experience, his answer is simply, “None. The only frustrations I’ve experienced were living ashore.”

Over thirty-five years of living aboard lay ahead but back then he simply longed to return “to a lifestyle that never hurt me.” Leaving Palm Island behind, he bought a steel hull and deck in Gladstone, refitted her over a few months and set off on this original ‘Soleares’ to cruise the East Coast, completing the second edition of Coral Coast and the original guide to the NSW Coast along the way. 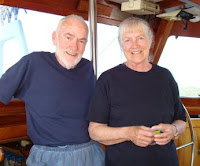 In 1975, he found a kindred spirit in second wife Patricia. A widow with three children and a sense of adventure to more than match his own, Patricia was immediately at ease on the water. The instant family demanded a bigger boat and a very run-down motor sailer named 'Silver Spray' was quickly purchased. Once again, a refit was needed, this time at Mosman Marina before a quick jaunt north where 'Silver Spray' was sold. Moving ashore behind Hervey Bay, the couple set upon building themselves a ‘real family-sized boat’ – the 18m ferro schooner, ‘Alegrias’. In just 15 months their new home was launched and fitting out completed afloat.

So with their newly-built ‘real’ boat, the Lucas family headed off for “points North, South, East and West, doing the usual coastal thing plus the SW Pacific.” Alan nominates “Watching the joy of my second family as they saw New Guinea for the first time” as one of his life's cruising highlights. "My tearing them out of Sydney suburbia was more than vindicated." Diminishing family numbers and the high cost of running a big boat eventually saw 'Alegrias' delivered to Darwin for a new owner in 1980 and the next chapter began.

Another stint of shore life was narrowly avoided when “going ashore from 'Alegrias', wondering where the hell we were going to live, we stumbled on a 14m ferro-cutter in the Sailing Club yard – just a bare hull and deck plus an engine, mast and a bit of hardware. We bought her, stowed most of our gear aboard, then drove to Sydney to round up equipment and revise my NSW book.”

You need a boat to revise a cruising guide! And yes, yet another refit ensued. This time a Tasman Seabird named ‘Response’ was given the Lucas touch before ‘doing’ the NSW coast. After serving its purpose, 'Response' was sold and the couple returned to their new cutter, ‘Tientos’ in Darwin. “There were just three of us by then, living in a perpetual dust storm as we fitted her out and rigged her.” 'Tientos' hit the water in September 1981, Indonesia in sight. But endless trouble with failed equipment saw them returning to Darwin, “I think all companies sent their duds to Darwin back then!” Alan muses. After a second failed attempt they finally gave up, sailing to Cairns for what Alan termed a ‘proper recommissioning!’

Perseverance paid off and in 1982 they left Gove on a circumnavigation covering 5 years and producing some vivid memories, like Alan's most nerve-wracking moment at sea when they were “fired at by an Ethiopian gunboat, ordered alongside in a 3-metre swell and interrogated under a row of cocked rifles.”

Returning home in 1987, 'Tientos' was one of the last boats to be cleared in Maryborough before the customs office closed mid-year. Another revision of the Coral Coast was due and the family again headed north for Torres Strait.

Son Ben was ready for high school the following year, prompting the next round of musical masts. ”We deluded ourselves into believing we couldn’t handle the correspondence schooling so moved into a home unit at Point Clare, near Gosford NSW.”

14m of boat was obviously more than they now needed and 'Tientos' was sold to make way for ‘Renee Tighe’. As with most of the Lucas’ purchases, the 9m wooden ketch was in deplorable condition. “We bought her in Queensland, then sailed (and bailed!) her back to Point Clare. I put her in an industrial yard and spent all of 1989 restoring her before launching in 1990. While Ben enjoyed high school (and a peer group that didn’t sail away), Patricia found a good job and I spent much of my time at sea somewhere along the coast.” A few years later, Alan and Patricia moved aboard permanently, leaving Ben where he wanted to be - ashore. “It worked out well” Alan says “because he could ‘man the base’ for mail transfers etc!” Five years' cruising followed as the couple took on the massive job of self-publishing the Coral Coast. ”The pay is better but the commitment to be somewhere within reasonable reach is a tough balancing act”, Alan says. “Going foreign again was out.” 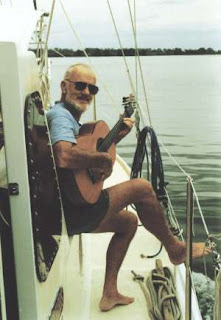 However a new project beckoned – more than big enough to temporarily quell any wanderlust. “For some time, Patricia and I had wanted to build the ‘ultimate’ boat which, regardless of how experienced one becomes, remains a vague notion. But our choice was a 15m shoal draft ketch developed from the lines of a Chesapeake Bay Skipjack. We built 'Soleares II' of fibreglass over seventeen months and launched her in June 1999. 'Renee Tighe' was sold during the period, having overlapped nicely as a home. This all happened in Maryborough, just 20-odd miles from where we built 'Alegrias' twenty-three years earlier.”

This undeniable icon of Australian cruising and ceaseless adventurer has passionately charted a life many of us can only dream of. Along the way, he has inspired and guided many towards their own calm anchorages while quietly living by an all encompassing philosophy. ”When you live life on your terms, in your preferred environment and can support yourself within that environment doing something you love, life doesn’t get much better. A billion dollars couldn’t buy my scene!”

Well, I would have liked to have met Alan Lucas but unfortunately our Club member is not only unfinancial but also bad in spotting a boat as the one sailing up the Clyde was not Alan's! "Storm Boy", you must have had your head buried in the bilge these past ten years because Alan's "Soleares II' is a two-masted ketch, not that single-masted 'weekender' anchored outside your front yard!

P.S. Some interesting reading on Australian coastal cruising and cruising guides for the east coast of Australia.