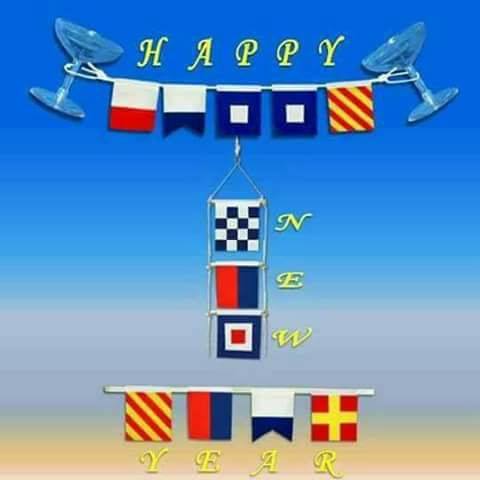 A voice from beyond the grave


A trailer from the movie "Ein Mann und sein Boot" which shows Rollo Gebhard's
third circumnaviagtion in 1983 when he was accompanied by his wife Angelika Gebhard.

When Joshua Slocum left Boston in 1895 in his 11.20m-long gaff-rigged sloop oyster boat named "Spray" to become the first person to single-handedly circumnavigate the world, he was 51 years old.

The Panama Canal hadn't even been built yet, and Slocum had to take the dangerous route around Cape Horn. You can read about his more-than-three-year-year-long voyage in "Sailing Alone Around the World".

When Rollo Gebhard left Genoa in Italy in August 1967 in his 7.25m-long yacht "Solveig III" on his first of two single-handed circumnavigations, he was 46 years old. It took him just under three years, and he chose the Panama Canal instead because it was there. His second single-handed circumnavigation in the same boat at the age of 53 took him over four years, from March 1975 to November 1979, and he, too, wrote a book about it (in German), "Ein Mann und sein Boot - 4 Jahre allein um die Welt" ("A Man and his Boat - 4 years alone around the world"). 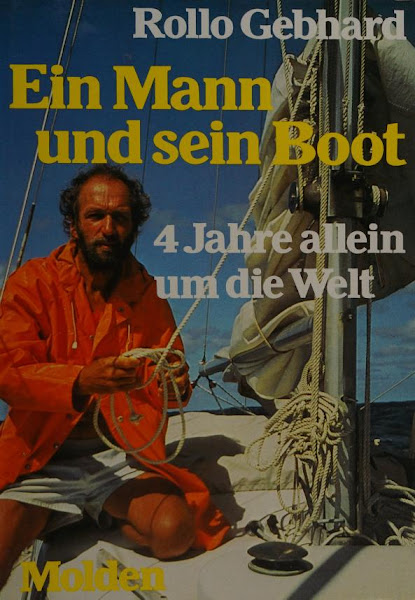 What made this book particularly interesting to me was Rollo's meeting with Tom Neale on Suwarrow Atoll. Not only did he visit him on his "Island to Oneself" on both his first and second circumnavigation, but he also wrote that he had taped an interview with Tom in November 1976.

He wrote about it in "Ein Mann und sein Boot" in German but how much better would it be to hear it in English from the man himself! I emailed Rollo's wife Angelika Gebhard in Bad Wiessee in Germany who promptly replied, "In dem Film über die zweite Allein-Weltumsegelung (1975-79) meines Mannes ist ein Interview mit Tom Neale enthalten. Der Film wurde damals im ZDF ausgestrahlt." ("The interview is included in the movie my husband made during his second circumnavigation which back then had gone to air on the commercial television station ZDF.") 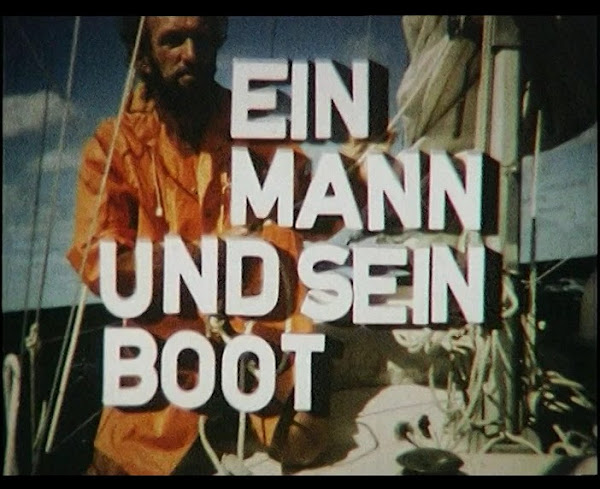 How to get hold of that movie? It was not on YouTube - except for the short trailer shown above - and not available on ebay or anywhere else. Frau Gebhard had the solution, "Das ZDF besitzt die Urheberrechte an dem Film, und ich vermute, dass es sehr schwierig bis unmöglich sein wird, ihn über das ZDF zu erwerben. Aber ich habe den Film, den wir für die Vorträge geschnitten haben. Ich könnte Ihnen den Teil mit dem Interview zukommen lassen, wenn Sie den Film nur privat einsetzen." ("The television station owns the copyrights to the movie, and it would be difficult if not impossible to get a copy. However, I could send you a copy of the part containing the interview for your own personal use.") 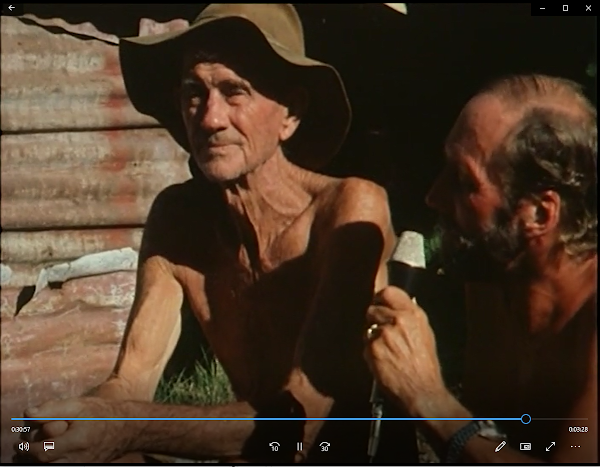 And so it came to pass that for the first time ever I was able to listen to the voice of my long-time hero Tom Neale and watch him as he was interviewed by my new hero, Rollo Gebhard. Obviously, I cannot show you the footage for copyright reasons but I can give you a transcript:

One, no, two voices from beyond the grave because Tom Neale died the following year in Rarotonga, aged 75, and Rollo Gebhard passed away at his home in Bad Wiessee in 2013, aged 92. Two lives well lived! 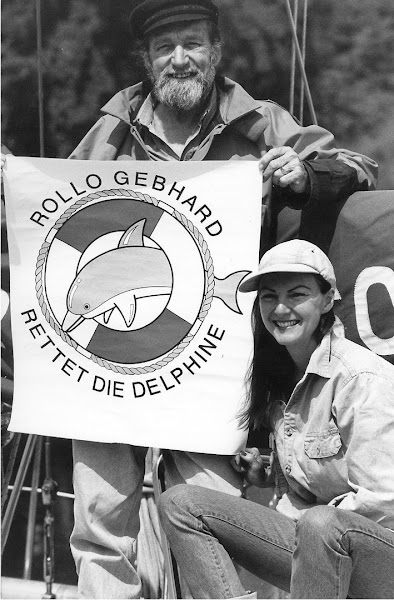 Rollo and Angelika Gebhard promoting their "Society to Save the Dolphins"

Thank you, Frau Gebhard, for allowing me to view this rare and historic movie clip, and I wish you continuing success with the "Gesellschaft zur Rettung der Delphine (GRD)" ("Society to Save the Dolphins"), started in 1991 by your husband and of which you are still the chairperson.

This is the true tale of Richard Phillips, the captain of a cargo ship taken hostage by Somali pirates in 2009.

Through this documentary our exploration into the Captain Phillips true story, we learned that the Maersk Alabama container ship had been on a voyage from Salalah, Oman to Mombasa, Kenya when it was attacked by Somali pirates on April 8, 2009. After observing the pirate boats headed his way, the real Captain Phillips used his radio to fake a call to the U.S. Navy. He disguised his voice to play the role of the Navy responder, hoping that the incoming pirates would overhear the communication and believe that assistance was on the way. It worked and the pirate mother-ship and two of its accompanying speedboats turned back (in the movie there is one less speedboat), leaving only one pirate speedboat in pursuit of the Alabama.

The crew of the Maersk Alabama activated the ship's fire hoses. Captain Phillips fired flares at the pirates and the ship was steered so that it would sway back and forth. However, the pirates eventually still managed to throw up a ladder and board the ship, taking the bridge.

However, according to Chief Engineer Mike Perry, the real Captain Phillips didn't lock the bridge even when the attacking pirates were known to be on board. "Even at that point he didn't lock 'em," says Perry. Most of the crew members fled below deck and locked themselves in the engine room, remaining there for over twelve hours in 130 degree heat, while Phillips and three other crew members were held at gunpoint.

Captain Richard Phillips and several crew members did try to offer the Somalian pirates $30,000 from the ship's safe, but they wanted much more. The pirates still took the money and had it with them when they fled the ship in the lifeboat. However, after the Navy shot the three Somalian pirates and boarded the lifeboat to rescue Captain Phillips, they found no trace of the $30,000. The money has never been recovered. 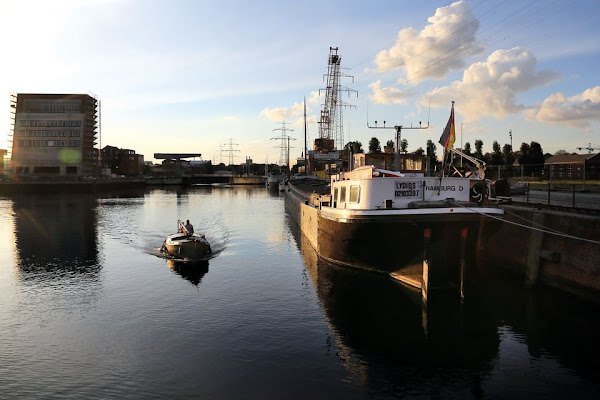 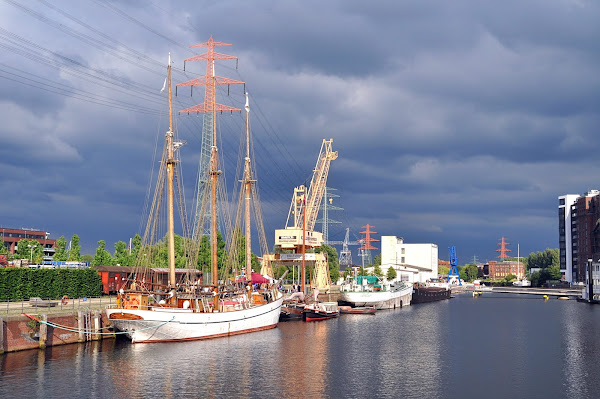 "All Is Lost" is a 2013 survival drama. Its title is a nod to E. W. Hornung's observation that when courage is lost, "all is lost".

The film stars Robert Redford as a man lost at sea. Redford is the only cast member, and the film has 51 spoken English words.